In a recent on-campus discussion of the “crisis” of inequality in education, a panel of experts with perspectives from the ground up unabashedly called out a critical missing piece to the solution: the political will.

Investing in education has produced proven returns, but the obvious solution remains elusive, according to panelists at the April 27 event, “Combating Inequity in Education: A Critical Conversation About the Path Toward Education Equity in America.” The discussion, sponsored by Stanford’s OpenXChange initiative, brought together three influential education experts on policy, groundbreaking research and breakthrough educational technologies.

Sean Reardon, Salman Khan and Linda Darling-Hammond were the panelists for the OpenXChange discussion on “Combating Inequalities in Education”. (Image credit: LA Cicero)

“We know the answer. We know it’s a good investment, and all the economists say so. Why wouldn’t we? said Sean Reardon, endowed professor of poverty and inequality in education at the Graduate School of Education. “It makes an awful lot of sense from every angle, except we don’t.”

“Maybe we need a teacher to run for president,” said Linda Darling-Hammond, Charles E. Ducommun Professor Emeritus of Education at Stanford and president of the Learning Policy Institute.

Darling-Hammond, who founded the Stanford Center for Opportunity Policy in Education and the School Redesign Network, also served as founding director of the National Commission on Education and America’s Future from 1994 to 2001 and head of the President Obama’s Education Policy Transition Team. In 2008.

Reardon and Darling-Hammond were joined by Salman Khan, founder and CEO of Khan Academy, a nonprofit provider of free online educational videos. With over 37 million students enrolled in 190 countries, Khan Academy is one of the fastest growing educational platforms used by students and teachers.

Panelists agreed that tackling the long-standing problem of inequality in education is more urgent than ever given the widening socio-economic inequality gap. Extensive research, including a new study by Reardon published today, has clearly shown the achievement gaps between rich and poor.

The gap in test scores between high-income students and low-income students is 40% larger today than it was about 40 years ago, Reardon said. And his latest study that analyzed the test scores of every school district in the United States from 2009 to 2013 found a surprisingly strong correlation between socioeconomic status and students’ academic performance as they enter college.

Indeed, the US education system “has been in crisis for a long time” and is failing to provide a foundation for many students, said Stanford President John Hennessy, who moderated the conversation.

“If the education system creates inequalities right from the start, then those inequalities will run through our whole society,” he said.

When Hennessy noted how Finland treats teachers like professionals with commensurate salaries, Darling-Hammond quickly replied, “We are the richest country in the world. Why can’t we do this? It’s crazy!”

Sobering statistics and issues of financial inequity in school districts anchored parts of the discussion, but not without glimmers of hope.

“We’ve had these issues for what seems like forever, but that doesn’t mean we can’t fix them,” Reardon said.

When Connecticut revamped its education system and raised teacher salaries in every district, the state rose to the top in every rating category — thanks to teacher quality, Darling-Hammond said.

But money is not the ultimate solution either. Instead, it allocates money where it’s needed, Darling-Hammond said. 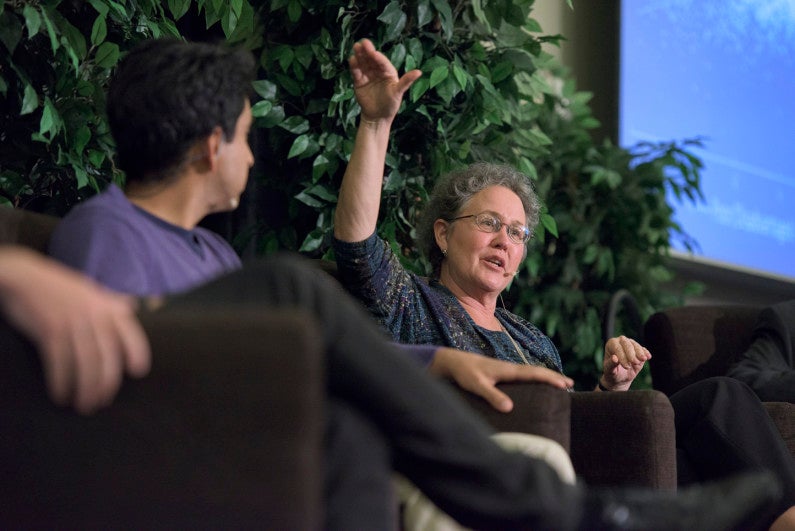 There are schools constructing new buildings and swimming pools, but nothing is related to children’s learning, she noted.

Smaller class sizes, competent administrators and the retention of quality teachers are all part of the equation. But investing in “comprehensive services,” such as improved student health and better access to vision care or dental care, also makes a difference, Darling-Hammond said.

Technology can also play an important role, Khan said. His academy tries to solve the problem of access to school programs for poor and affluent school districts.

Moreover, “personalized education” is “something that computers are good for,” he said.

Khan Academy, he said, has partnered with the College Board to develop more effective ways to prepare students for college entrance exams, such as by diagnosing weak spots, which allows teachers and students to intervene earlier when needed.