“Kissing” the Ministry of Education in Buenos Aires, teachers and other education workers are protesting mass layoffs and other changes in an area so far critical to inclusion policies. Credit: Guido Fontan/IPS

BUENOS AIRES, Sep 21, 2016 (IPS) – In Argentina, teachers, students and trade unionists are protesting mass layoffs in education, which they say are part of a process of undermining public education and moving towards a new needs-based model of the market.

“An educational model is emerging which is no longer centered on social rights for the whole population but rather on the creation of a socio-economic model which follows the logic of the entrepreneur, a logic self-made person,” Myriam Feldfeber told IPS.

The education expert from the University of Buenos Aires participated in a “hug” around the Ministry of Education in the Argentine capital on August 31, organized to protest against a new wave of 200 layoffs and setbacks regarding “the construction of a free, universal and egalitarian education.

“It is very concerning that some central positions in the Ministry of Education are filled by people who do not come from the field of education – business leaders and people who have no experience in the sector. public”. – Myriam Feldfeber

Most of those laid off were now temporary or contract workers, and the layoffs add to 1,100 others who have lost their jobs in education since centre-right Mauricio Macri became president on December 10, 2015.

Since then, 10,662 civil servants have been dismissed from 23 ministries and government agencies.

“I worked at the Teacher Education Institute for over six years, in an area of ​​policy implementation related to research development in teacher education institutes across the country,” Laura said. Pico to IPS.

“Friday (August 26) I received a call from an unknown number informing me that I was fired by the ministry and that on Monday I should not return to work,” she said.

The massive layoffs are part of a larger process of downsizing and eliminating several education policies, many of which were implemented under the administrations of Néstor Kirchner (2003-2007) and Cristina Fernández (2007- 2015).

The Association of State Employees (ATE) complains of an underspending of the education budget and the dismantling of the areas of teacher training, human rights, adult education , statistics, children’s and youth choirs, among others.

We note with great concern that our dismissals – in addition to being the target of protests by our union – undermine educational policies and reflect a withdrawal of the state from the territories,” the ATE delegate told IPS. , Lautaro Pedot.

Fernanda Saforcada, education expert and academic director of the Latin American Council of Social Sciences (CLACSO) based in Buenos Aires, deplored the dismissals, which in addition to being a human and social problem, “result in the loss of cumulative experience “.

“We are talking about technical teams who have carried out an activity, who have links at work, networks which have been formed. All this represents a major loss. Expertise, history, knowledge and relationships are lost,” she said. 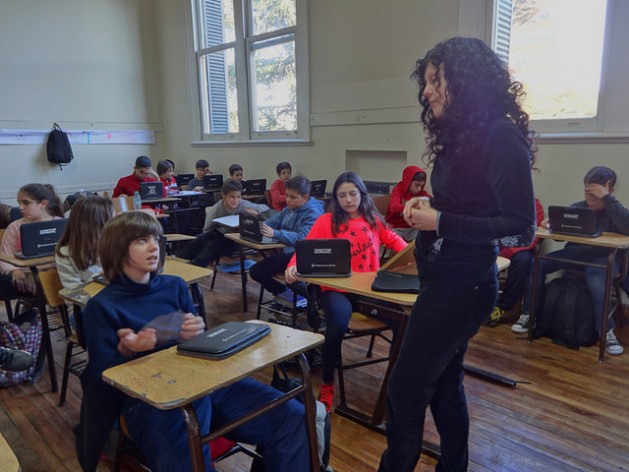 The learning process has been transformed in Argentine public schools by the Conectar Igualdad (Connecting Equality) program, which provides each student with a laptop. It is one of the education projects affected by the changes introduced by the government of Mauricio Macri. Credit: Fabiana Frayssinet/IPS

Other programs that have been reduced or eliminated include college scholarships, the promotion of gender equality, and the provision of computers to students with special needs or as an incentive to complete high school.

“I think now the intention is to aim for an educational system opposed to that of inclusion and to guarantee the right to education,” Pico said.

According to Feldfeber, who is also the coordinator of Red Estrado (Latin American Network for Studies on the Work of Teachers) and the CLACSO research groups, “what basically disappears is the idea of ​​education as a right, on the horizon of public policies”.

As an example of the inclusion strategy that was being implemented, she mentioned the creation of 1

4 national universities, “especially where segments of the population traditionally excluded from the system are beginning to have access to education”, which are now being called into question.

“It is very concerning that some central positions in the Ministry of Education are filled by people who do not come from the field of education – business leaders and people who have no experience in the sector. public,” he added. Feldfeber pointed out.

“One of the highest positions is held by a former CEO of Philip Morris (Ezequiel Newbery, now assistant secretary for social and educational programs) who says he doesn’t know about education, doesn’t understand what a socio-educational policy, and that he comes to the ministry to bring order,” she told IPS.

“‘Bringing order’ means what we are seeing now: laying off workers and dismantling teams,” she said.

The government claims that it is “modernizing” the public administration and restructuring the ministries.

The Minister of Education, Esteban Bulrich, advocates an “educational revolution”, which he defines as “giving all Argentinians, regardless of their place of birth, the possibility of having the same quality education”.

According to Bulrich, “Inclusion in itself, without quality, is not good, it is only halfway, inclusion in itself is a fraud, and to improve quality, we must start with the real agents of the change: teachers”.

“The idea is to provide (teachers) with more tools, so that they have a modern, 21st-century perspective of the skills and abilities that children in our education system need to become self-reliant beings,” said he said at a ceremony in June.

Fernanda Saforcada said the private sector is being strengthened “in the context of a process of transforming the role of the state”.

“The state is taking on a new role in finding alliances with NGOs (non-governmental organizations), foundations and business sectors,” she said.

“Many of these NGOs are linked to business sectors, which shows how the public sphere has been undermined, giving new content to education management,” she told IPS.

“And when we talk about the private sector, beyond the public-private dichotomy, we are talking about the interests of certain sectors which take precedence over the common good.

The ATE complained about an attempt to “privatize” programs such as Connect Equality, aimed at promoting digital inclusion, inherited from the previous government, which this year “saw the influx of international companies such as Microsoft and Google”.

The intention, ATE said, is to replace locally produced open-source software, such as Huayra, with these commercial operational programs in laptops distributed free of charge to students.

The Education for All Global Monitoring Report 2000-2015 by the United Nations Educational, Scientific and Cultural Organization (Unesco) highlighted the progress made in the Argentine education system over the past decade. , in accordance with the objectives set at the World Education Forum in Dakar in 2000.

The report points out that public spending on education in this South American country is among the highest in Latin America, representing 6.26% of GDP.

Additionally, 99.1% of Argentine children are in primary school, making it the country with the highest coverage in the region, along with Uruguay.

With regard to secondary education, the net enrollment rate is one of the highest in Latin America: 89.06% in 2012, although dropout rates remain a concern.

Argentina, with a population of 43 million, has also reduced the illiteracy rate from 2.6% to 1.9% of people over 15 years old.