Hyderabad: In 1834, an English public school, St. George Grammar School, was opened in Abids by a Church of England clergyman.

The very first step towards the formation of a public education system was the opening of Oriental College as Dar-ul-Ulum by Salar Jung in Hyderabad in 1853-54 with 130-160 students enrolled. This college imparted knowledge of Eastern Deccan traditions and a taste for learning through two classical languages, namely Arabic and Persian. Provision has also been made for instruction in four modern languages ​​– Urdu, Telugu, English and Marathi. Subjects like physics, chemistry, mathematics and astronomy were part of the curriculum.

All Saints High School came into existence in 1855. It was established primarily to meet the needs of His Highness the Nizam’s Army Staff, but later the doors were opened to children of all castes and communities. In 1860, a school was opened in each district seat and Taluk seat. WH Wilkinson was appointed Secretary of Education and Director of Public Instruction in 1869-1870.

Modern western education in the state of Hyderabad started in the second half of the 19th century. Efforts have been made to establish an adequate education system in Hyderabad which has long been neglected. During the time of Salar Jung, a number of educational institutions were established. Salar Jung took a keen interest in the development of modern education and the decade 1871 – 1880 witnessed progress in education.

Two private schools, Madrasa-e-Aliya and Madrasa-i-Aiza were established to provide education for the children of the nobility. The establishment of City High School, Chadarghat High School, Nizam College, Mahabubia College, Asafia High School, has also played an important role in the growth of modern education in Hyderabad State.

A school of engineers was created in 1870 to train the technical staff needed for the public works department. In the year 1876, AD students received foreign scholarships to go abroad for advanced studies. They were also promised employment in government services upon completion of these advanced courses.

Apart from boys’ schools, a number of girls’ schools known as Zenana schools were also established. Before the Salar Jung period, girls’ education had not progressed much. During the reign of Nizam VI Mahabub Ali Pasha, the first Zenana government school was opened. Salar Jung was the first in Hyderabad to educate his daughters through a French governess, who were educated privately.

Noor Unissa Begam had also learned Persian, Arabic, Urdu and English. She paid particular attention to girls, especially in the study of customs, manners and ways of life. A school for daughters of noble families was founded by her sister of Imad-ul-Mulk, Shujaat Ali – who opened a school in her palace where education was given to daughters of nobles and Jagidars. Urdu, Persian Arabic, English, history and geography were the main subjects taught in his palace.

Encouragement for women’s education was given by the Nizam’s government and private institutions. St. George’s Grammar School and the Wesleyan Mission Schools for girls were intended solely for Anglo-Indian Christians. Dr. Aghornath Chatopadhyay, who was keenly interested in spreading female education, founded the Anglo-Hindu vernacular school known as Chaderghat School as Glosia High School in 1881.

The school taught Telugu, English, Urdu, history, geography, home sciences and Hindustani music. In total there were 76 girls including 26 Muslims and 50 Hindus. It was the only Urdu middle school for girls in the city of Hyderabad. In 1882, Wesleyan Mission opened girls’ schools in Chaderghat and Secunderabad. They were aided by the Nizam government.

To improve the administrative standards, Salar Jung recruited talented people from all over the country, mainly from northern India. In the first phase of the reforms from 1853 to 1883, Salar Jung’s efforts to modernize the administration required civil servants to be trained in British India. Later, non-Mulki administrators seized political power while Mulkis tried to obtain an administrative position.

The framework of a modernizing bureaucracy was established and a group of non-Mulki administrators were imported into Hyderabad State. Syed Hussain Bligrami, Mahib Hussain, Syed Mehdi Ali, Mohin-ul-Mulk, Chirag Ali, etc., were among the competent administrators. Aghoranath Chatopadyaya was a famous pedagogue and he was the founding principal of Nizam College. The grandson of Mirza Galib, the famous Urdu poet Mirza Asha Beig was invited to Hyderabad to give an education to Prince Mahabub Ali Khan. The question of Mulki and non-Mulki started during the period of Salar Jung. 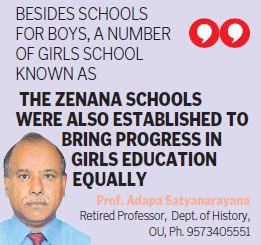 You can now get handpicked stories from Telangana today on Telegram every day. Click the link to subscribe.